She Escaped Homelessness with Her Children 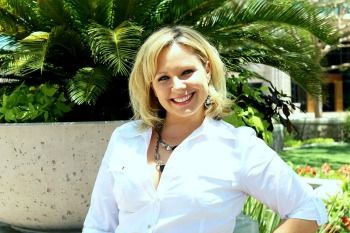 Amber Black never stops working. She cradles her cell phone in one hand, checking messages, as she types at her computer in the coffee shop. Amber’s real estate business is thriving, and her children are starting college and embarking on new lives.

But Amber once was in a very different place. Homeless at age 16, caring for her twin girls, Amber felt alone and terrified. “Those years of being homeless seared my soul,” she says. “Even now, it is hard to speak about.”

Homelessness seemed a world away as Amber grew up contentedly in Gilbert, Arizona. Her life seemed secure. She did well in school, she had many friends, and she was close to her family. But then she became pregnant.

“That was a turning point for me,” she says softly. “I was pregnant with twins, at age 16, and I felt so alone. My children’s father was so young, and my parents were too busy fighting with each other, and my news that I was pregnant dropped like a lead balloon.”

Still, she focused on motherhood, and she soon gave birth to Jasmine and Maraya, beautiful twin girls whom she adored. She quickly realized, though, that motherhood was difficult, even in the best of circumstances. “As a teenager, you fantasize about going out with friends, not having a care in the world, but you have to be strong for your kids. Taking care of them is a 24-hour proposition.”

To her dismay, her parents decided to divorce, and they sold the house. Amber decided to take her twins and live with the children’s father, who at age 22 was struggling to make ends meet. After a few months, he said he couldn’t care for them. The news was devastating, and Amber faced a plight few people imagine for themselves: no roof over the head, no place to call home.

So she asked friends if she could stay with them, and she and her twins slept in a friend’s garage. She bounced back and forth between friend’s houses, all the while caring for her girls. With no car, no money, and no job, she was caught in a world of day-to-day survival. Taking the bus with two strollers became an all-day challenge. Strangers would bark at her to hurry, and her kids were often sick and crying. She longed to give her children a stable, safe home.

It was a year and a half of desperation, but her luck turned when a friend mentioned A New Leaf and its La Mesita Family Homeless Shelter. “I was beyond overjoyed when I was accepted into the shelter,” she says, quickly adding, “It was more than a shelter. They said they could help me find a job, get back on track, find childcare, and get a permanent home.” Amber felt like she had won the lottery, and she gratefully vowed to do anything and everything to commit to the program.

She soon found a job, and she began saving money for an apartment. She realized that she could set goals and accomplish them. “For me, La Mesita was not a hand-out, but it was really a hand-up,” she says. “They asked me to work hard, and, in turn, they gave me the support I needed.”

Today, Amber is grateful for the experiences she has had. “Too many times I could have lost my kids,” she says. “It puts a knot in my throat, and I want to cry, thinking of how desperate I was,” she says. “But La Mesita was there for me. The shelter staff and residents were like my family. I don’t know what I would have done without them.”

A New Leaf’s La Mesita Family Homeless Shelter is a vital part of the community, and residents like Amber have benefited every day from the generous donations of community partners and donors. A New Leaf is a force for independence, and women like Amber can indeed turn over a new leaf.