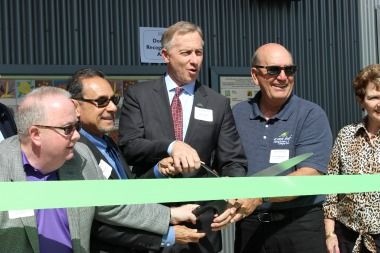 Campaign Co-Chairs, Trey and LeAnn Basha, spoke to the assembled group of their passion for the shelter, its importance in the community and the value of giving back.

City of Mesa Mayor John Giles spoke about his pride in the partnership between A New Leaf and the City of Mesa, and his appreciation for the goodwill of the community to support the rebuilding of the historic shelter.

The shelter, comprised of 16 units, is part of a multi-phased project for the La Mesita Campus, of which the next phase will be 30 additional units of housing for the chronically homeless.

The generous supporters of this important project all deserve our gratitude and utmost thanks for making this vision a reality. We are grateful for their efforts!