She Battled Her Demons 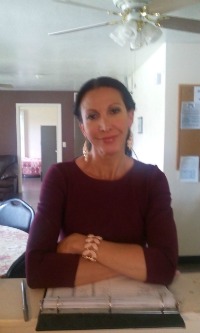 Roxanne Knepp has battled her demons, and she is a stronger person now as she prepares to leave A New Leaf’s East Valley Women’s Shelter for her own apartment. She has been saving her money, and she works 14-hour days at a job she loves – a job she found through A New Leaf.

“Without A New Leaf, I don’t know what I would have done,” she says. “I had no home, and no friends or family to help me. I was at such a low place in my life. But then I found this wonderful place. I’m so blessed, and I really am optimistic for my future.”

It wasn’t always this way. Previously, Roxanne endured the break-up from the love of her life, which brought her to her knees. “We were going to get married, and then he just walked out one day, never coming back,” Roxanne says, her voice lowering. “I was devastated.”

The emotional trauma was so great that Roxanne stopped talking to friends and closeted herself in her home away from everyone. She started drinking, washing away her emotions and pain with a bottle of liquor.

Soon, her drinking began to increase, and, as it did, so the toll on her life. She would miss every Monday at work after binge-drinking over the weekend. Her health began to deteriorate, and she isolated herself from her family.

Soon, her boss staged an intervention, and he asked that she commit to a rehab program and take time off from work. Her response? She left work and drove to the liquor store buying bottles of booze. The next day she wrote her resignation letter. She moved in with a friend to save money and continued to drink.

Then, in the space of eight months she received four DUIs. Her life was circling downward at a reckless pace. The fourth DUI led her to a 4-month stint in jail. But then she discovered that with at least three DUIs, the state could send her to prison. And that’s what happened. She was sentenced to prison for three years.

“That time in my life was extraordinarily difficult,” she says. “But it saved me. It gets you out of your patterns and strips away everything you know. What the judge gives you is time, and I could start fresh.”

She was finally sober, and she started to set goals. Roxanne was released early for good behavior, and she was free to start a new life.

Roxanne didn’t have any remaining friends or family in the Valley, so she was desperate to find shelter. “I really needed a job,” she recounts. “But when you are job hunting, you need a place to stay, a home. I didn’t know what to do.”

That’s when she discovered A New Leaf and the East Valley Women’s Shelter. Roxanne called A New Leaf and learned that a bed was available at the shelter. “I was elated,” she says. “This was my chance to start with a clean slate.”

“The staff is amazing,” Roxanne says. “They want you to succeed, and the shelter is safe and warm and clean. I am so blessed. I owe everything to A New Leaf!”

Now, Roxanne looks forward to her job, a new apartment and a sober, joyful life full of work and relationships.

“I’ve made my share of mistakes,” she says. “Learning from them and working to improve my life is what I want to do now, especially thinking about others besides myself.”

A New Leaf is all about new beginnings. You can help people like Roxanne by making a donation. Will you make a gift today?