A Veteran Struggles with Homelessness 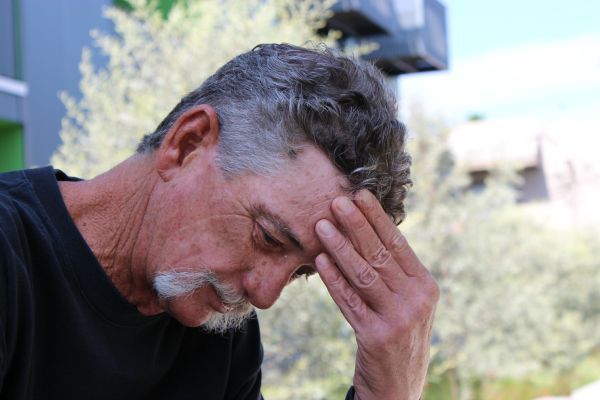 A veteran of the armed services, Michael had spent many years serving his country. He received many awards and recognition for his valor. But then a perfect storm of bad luck happened. He lost his job, his marriage, and his home.

He was going through a divorce with his wife, and he decided to drink more heavily to escape the emotional trauma. Then he received a DUI sentence that resulted in a summer-long stint in jail. He had been drinking, and one night he accidentally swerved his car head-on into a stop sign, and was arrested by a nearby police officer for driving under the influence.

Jail sobered him up. But when Michael was released, he had no place to go. He had no family to turn to, and his divorce left him alone without a support network – and no home. He had lost everything. “I was at a lowpoint in my life,” he explains. “I didn’t trust anyone, and so I had to rely on myself.” He lived for a year outside, using public facilities for bathing and basic necessities. He scavenged for food.

Homeless, hungry and overwhelmed with the daily struggles of living on the streets, Michael felt isolated from everyone. He slept in the park, in alleys, on trails, anywhere he could lay his head.

He didn’t have a car, so Michael had to walk to every destination in triple digit heat. “I was pretty desperate,” he says. “You never know how bad it can get, until you are homeless with no shelter.”

Michael did have self reliance and the skills to cope with adversity. “I learned a lot from my time in service,” he says. “I could get by on little food and the clothes on my back. I had some skills.” But he was very lonely.

Then, Michael discovered A New Leaf’s La Mesita Apartments, a housing complex for low income individuals and the chronically homeless. Through a newspaper article, he learned about the service, and he contacted the City of Mesa to seek a voucher to enable him to find a safe, stable home. He was overjoyed when he was accepted into La Mesita Apartments.

“I like having a roof over my head now,” he says. “I’m a survivor. I never thought I’d be homeless, but I learned to dig deep. You can do anything you put your mind to do. I’m very grateful for what I have now.”

As a 60-year old man, Michael has seen his share of hardship, but nothing prepared him for his year of living on the streets. “It was a very hard thing to do.” he says.

He still likes to spend time outdoors, and arises at 5 am to walk to Jack In the Box for his morning coffee. He has made many friends at the La Mesita Campus, and the staff speak fondly of him.

“I owe everything to A New Leaf,” he says. Now he wants to give back by telling his story.

You can support A New Leaf’s mission to help homeless individuals. Donate today and support our mission of Helping Families . . . Changing Lives. A New Leaf is where homelessness ends.