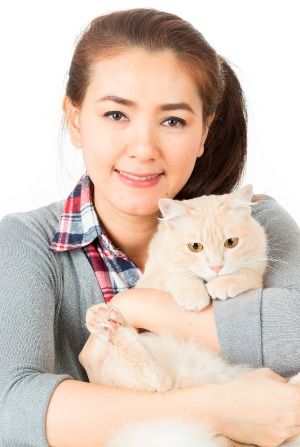 A very articulate Amy defined her story as "not your typical domestic violence situation." She wasn't romantically involved with her roommate, but because she had no place else to go, it was either room with him and live in daily fear or go to the streets. The reality of one and the thought of the other were equally terrifying to her.

When Amy's mom died, five years ago, Amy and her dad moved to Arizona with plans to create a brighter future. Workforce opportunities presented some challenges for Amy and then her dad passed away earlier this year. It was a very lonely time in her life. "I didn't have anyone to talk to or rely on for help," she recalled. "All I have are my two cats and dog. They mean everything to me."

Out of desperation, Amy moved in with a male acquaintance to share expenses. Other people seem to work with similar circumstances these days and he seemed very safe - at first. Amy was contributing as much as possible but had lost her job. It became more challenging to pitch in financially. Her roommate seemed patient and accepting of her circumstances. But things eventually changed.

He began to ask for "special benefits." At first Amy thought he was joking, although she started to become fearful. As time went on, he began to change, becoming emotionally abusive, threatening. He was a really big guy, and Amy very tiny. She felt certain it was only a matter a time before he followed through with threats of physical abuse. She was always afraid. He started bringing home an intimidating group of friends and it was clear to Amy that they were using drugs. Daily life became a daunting cycle of torment and avoidance. However, Amy's choices to get away were limited.

She wanted to run but had no place to go. Her beloved pets, who were all that she had in life, would need a temporary home if she was to go into a shelter program. It took some time to find a place for them. All the while, Amy was becoming more and more disparaged. She could feel her self-worth slipping away.

"I was completely broken when I finally came to A New Leaf's Autumn House," Amy said. "It took me about a week before I actually realized what I had gotten myself into and then out of." The Autumn House staff was so compassionate and understanding. "They took care of me," she continued. "They provided for all my necessities and even got me a haircut. They have the biggest hearts and so much patience. I'm becoming a better person emotionally and spiritually because of them."

Amy's Case Manager was able to get her connected with computer access, which aided in her job search. Staff provided the support system she needed. Today, Amy resides in an affordable housing apartment. She has a job, her pets, independence and a bright future ahead of her.

"People need to know how important Autumn House was to me and is to others. I really want to let your donors know how needed their support is. This experience has taught me a lot about being grateful and being a better human being. I hate reliving what I went through but I want to share it for the sake of Autumn House. I am much stronger now and just eternally grateful," Amy said with tears running down her cheeks.

As she grows stronger, you may see Amy one day soon, working as a volunteer or speaking on behalf of A New Leaf. Your support does more than get people off the streets and out of abusive relationships. It provides a safer, healthier community with grateful individuals who want to give back.

Thank you for helping Amy.