Mila's Story: Tears of Thankfulness for Her Children 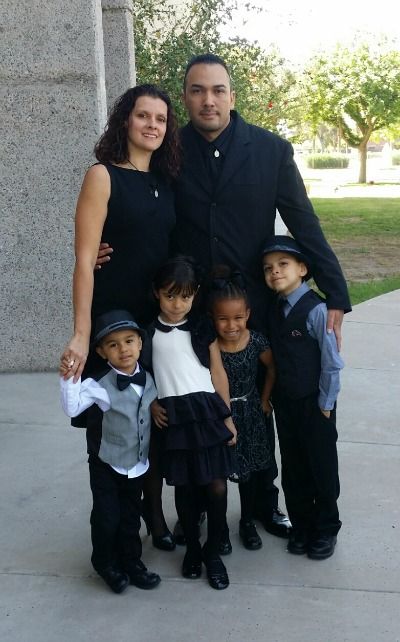 Sometimes a family follows a well-set plan for their lives. Find your soulmate, get married, decide together on the number of kids you will have, plan your expenses, pick out all your children’s names in advance, and perhaps even buy a home to raise them in.

However, most of us don’t work that way. Mila Carrancho and her husband, Christopher, were just like the majority of Valley residents: their idea of a family was quite different from the reality of their lives and circumstances. But what they substituted for a spreadsheet of milestones was a life of total love, devotion and sense of purpose that resulted in their fostering twenty-six children during the last seven years, many of them through A New Leaf’s foster care program.

“When Christopher and I married, we planned on having two biological children and two adopted children,” said Mila. “I saw the love in the lives of my cousins, many of whom were adopted. And I yearned to bring that same love into our own family.”

Unable to have children herself, despite attempting fertility treatment, Mila began to immerse herself in learning about adoption services. She quickly discovered that adopting a child internationally was very expensive and cost-prohibitive. “It’s obscene how much it costs to adopt a child from another country,” said Mila.

So she filed for a license to adopt locally. After a year of waiting, no progress had been made. The bedroom she and Christopher decorated for their new child was empty, and she began filling it with apprehension and fear of the unknown.

Eventually, they could not wait any longer. They gave up the thought of adoption for the time-being and decided to apply for a license to take care of children within the custody of Arizona’s Department of Child Safety; a temporary solution and one that would likely end up with the child leaving them to return to their family of origin. They tried to avoid thinking of the future, and to think only of today. They decided to make the commitment for a foster care license by completing the necessary requirements and within a week, Mila and Christopher received two siblings for placement.

These young toddlers had fit in perfectly with their entire family. “We were beyond thrilled!” exclaimed Mila. “It was such an exciting time for our family.” But the children’s grandparents, who were unwilling to care for them, were unhappy with the arrangement because Mila and her husband did not share the biological family’s faith. They opposed to the children remaining in their care and would not accept the placement home; soon their “bundles of joy” were pulled away to live with their grandparents.

“We were just devastated,” said Mila. “But we decided we were not going to let ignorance keep us from our goals – and our happiness. Certainly, you can’t blame the children for these situations.”

This meant they were back to square one. However, the needs of Arizona’s Department of Child Safety are so great that within two days, they were given another child. Shortly after, another three children came and left, each time a wrenching goodbye for the parents.

Fortunately, their seventh placement proved to be their lucky break. “Logan was a newborn with brightness in his eyes, affection, and a curiosity about things,” said Mila. This was a story that would carry on as Logan became eligible for adoption, and at 17 months became a part of the Carranchos’ forever family. In time, Gigi, their 14th placement, arrived and became their second adoption. Maya, their 17th placement, and her brother Oliver completed their family. “Our children are our biggest cheerleaders, and they have each done their part in contributing to our home,” said Mila. “We are so incredibly fortunate to have these amazing children in our family.”

She further explained, “Children who are in child protective services want so badly to hold on. They want care and attention. Sometimes they are so afraid and they struggle with accepting their newfound home.” The children’s anticipation of loss is palpable, especially after being placed in multiple homes.

Mila and Christopher contemplated closing their foster care license after Maya and Oliver, but didn’t feel that their journey was over just yet. Throughout the last seven years, dozens of children have come through the doors of the Carrancho family. Mila says they have stayed as little as four days and for as long as two years.

When the children have become eligible for adoption, the Carranchos celebrated with tears in their eyes and grateful hearts. Mila’s and Christopher’s devotion to every child who has entered their home has resulted in extraordinary memories that they will treasure throughout their lives.

Mila further explains that it is excruciatingly painful when a child leaves their home. “You will get attached, as you should. The kids need you to get attached; it helps them feel safe and learn how to bond so they can build healthy relationships. We spend countless nights awake worrying every time a child reunifies, but the joy of caring for the children, and the memories that no one can erase far outweigh the heartache of saying goodbye.”

“My husband is my rock and has been a constant support. He starts working at 5am, which allows him to be home early in the afternoon and to be actively involved in our children’s lives. It really does take the entire family coming together to solve the daily issues,” Mila said.

Mila and Christopher are both grateful to A New Leaf’s foster care staff who have helped with the licensure, adoptions, daily support and resources. “A New Leaf is such a wonderful organization,” said Mila. "They have shared our high points and low points. We know they always have our backs, and that means a great deal.”

If you are interested in A New Leaf’s foster care services, please go to our website at TurnaNewLeaf.org for more information. And if you want to donate to the foster care program, please consider making your heartfelt gift today. You can join the Carrancho family as one of the many dedicated families who are bringing a brighter future to Arizona’s children.