5 Types of Homeless People: It's More Complicated Than You Think 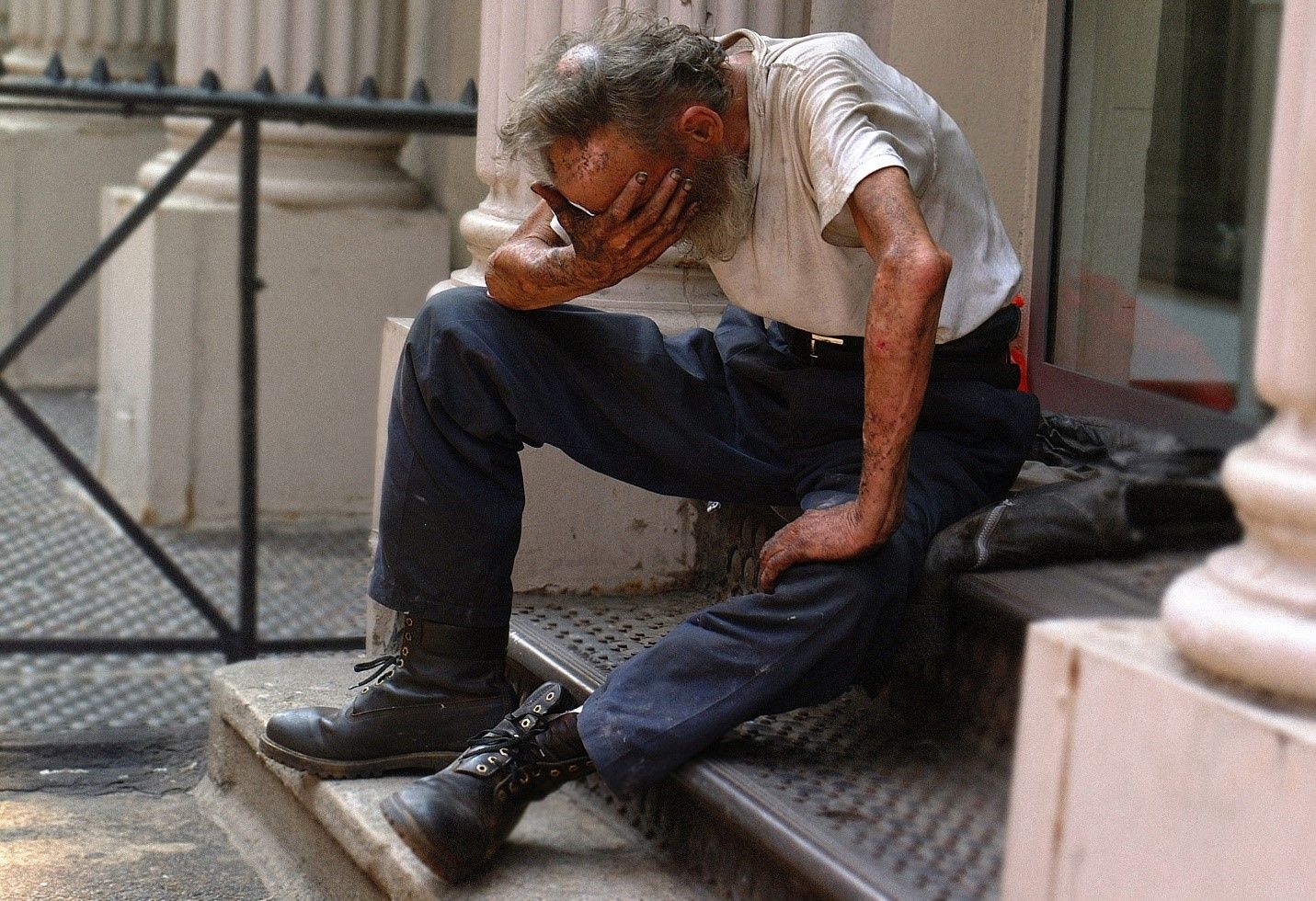 Have you ever stopped and thought about what you would do if one day you became homeless? Who you would rely on? What resources you would reach out to? Many people and families face these questions when they unexpectedly find themselves without a home.

More and more men, women, and children are becoming homeless in Arizona each year. Every year the Maricopa Association of Governments conduct an annual PIT (point-in-time) count. This count is designed to determine the number of homeless people within Maricopa County on a particular night in the year. On the night of Jan. 21st 2019 there were 6,614 homeless men, women, and children within Maricopa County alone, and this is up 316 from last year’s count.

The percentage of homeless people sleeping on the streets in Maricopa County has risen over 37% in just two years from 2016 to 2018. With the economy thriving and the unemployment rate the lowest we have seen in years, it doesn’t quite make sense at first glance why we have a higher amount of homeless population than we did during the height of the 2008 recession (ADEC 2009). With this staggering increase, we must address the groups of people who are slipping through the cracks, because there are some groups that are more vulnerable to homelessness than others.

For a lot of us it is hard to imagine a scenario in which we would find ourselves in this position. However, it is more common than you think and it can happen to anyone. Here are 5 types of everyday people who often find themselves homeless and unable to get back on their feet.

Have you ever lost a job unexpectedly? If so, you know the fear and anxiety associated with not knowing where your next meal is coming from. Unemployment is the leading cause of homelessness among both families and individuals.

Lack of affordable housing combined effects those living in poverty the most, making it difficult to maintain or find housing after a lay off. According to an article by Rent Jungle, rent in Phoenix rose by a 12.95% amount last year. This rise in the price of rent has pushed people further away from the city and has pushed some completely out of their homes. This problem has been growing increasingly intense in Arizona over the past few years. Arizona is now the third worst in affordable housing according to an article written by AZ Central.

Survivors of domestic violence make up a significant amount of homeless populations nationwide. The pressure involved in escaping an abusive relationship sometimes forces women and children to turn to the streets. Waiting for housing opportunities is not always an option for safety and financial reasons. If person attempting to escape an abusive relationship does not have family or friends to rely on, they can easily find themselves without adequate housing for themselves and their children.

A common barrier to becoming economically self-sufficient is access to affordable child care. Surprisingly, children are the second largest group of people in homeless shelters, the first being single men. When mothers escape violent situations, they face the struggle of finding sufficient and affordable child-care for their children. Without child-care, it is difficult for mothers to join the workforce and maintain a stable source of income for their families. These set of circumstances leaves many domestic violence survivors to go from a dangerous situation to fending for themselves on the streets.

In 2017, there were 320 homeless unaccompanied youth throughout Maricopa County. Unaccompanied minors are characterized by those homeless people above the age of 18 but under the age of 24. These young adults have either been kicked out of their home, aged out of the foster care system, or simply left home.

There are many reasons why youth might become homeless. Some may become homeless because of unstable family situations, some because of drug-use in the home by either the youth or the youth’s parents and some are kicked out of their home because of their sexual orientation or gender identity. In fact, about 40% of homeless youth identify as LGBTQ. These young adults often run away or are kicked out of abusive households where their safety is not certain.

Over 40% of adults who are experiencing homelessness reported that they suffer from mental illness, HIV/AIDS, or a substance disorder. Mentally ill Arizonians are especially at risk of becoming homeless. Mental illness is both a cause and effect of homelessness. A homeless person’s mental state is often aggravated by the conditions that they are living through. This only prolongs and perpetuates their mental illnesses.  On the other hand, mental illness can make holding down a job or maintaining familial relationships very difficult and these people have the resources necessary to maintain some normalcy in their lives. Without help, they may find themselves living on the streets.

(“Homeless men are the largest group” and they are the least served. We have the only men’s shelter) Homeless veterans are a group that is most effected by homelessness. In fact, veterans are one of the groups most likely to be labeled “chronically homeless”. This means that they have been homeless four or more times in the past year or longer than a year.

There are many causes for homelessness among veterans: loss of support after being discharged from the military, injuries during service that prevent them from getting a stable job, destabilized family life from extended deployment, etc. It truly is remarkable how much these men and women sacrifice for our country, and many of them do not have a place to rest their heads when they arrive back.

More than anything, the biggest problem that veterans face is the difficulties that come with adjusting back to civilian life. Additionally, veterans are more susceptible to drug addiction than the national average. Paired with mental illness such as PTSD, this often destabilizes veterans and their families after being discharged from the military.  ­

What we’re doing to help:

A New Leaf has an extensive range of comprehensive service programs focused on assisting individuals and families facing homelessness. Since families and children are such a large portion of the homeless population, we have multiple programs that cater to supporting families. Our La Mesita Family Homeless Shelter, is a place where families can regroup and have a comfortable place to stay while they get back up onto their feet.  This facility offers on site services that are meant to help residents t get back into the workforce such as: workforce development, financial literacy classes, after school program. This facility can house up 250 adults and children. Within this facility we have programs in which parents can learn valuable skills that will help them to rejoin the workforce and start taking the steps necessary to get their family back on to their feet. La Mesita also has a preference for veterans

For those families that are attempting to escape environments of domestic violence there is the Rapid Re-Housing Program.  This program is designed to victims of domestic violence find emergency housing when escaping an abuser. Our goal with this problem is to prevent families from spending time on the street. We want these families to receive immediate assistance so that their lives are not disrupted for even a moment.

A New Leaf assists the largest homeless population, single men, with a shelter specifically created for them. The East Valley Men’s Center provides assistance to homeless men who otherwise receive the least amount of assistance we describe this facility as a “Working man’s facility” because, our goal is to help men staying at these facilities to secure employment and save money so that they can eventually find safe, stable and secure housing.

For situations that require more long-term support, we offer our Desert Leaf Apartments, designed with veterans, the people with mental illness, and families in mind. These apartments offer stability and support to people while they work to build stability in their own lives. Nearly 50% of the units occupied in this facility are veterans. We understand the importance of ensuring that our veterans have the tools necessary to rebuild their lives and find careers that are stable.

What can you do to help?

A New Leaf is only able to sustain its programs from the generosity of members of our community like you. You can help curb this epidemic of homelessness effecting our community by doing in a few different ways. Every little bit of help makes a huge difference!

Volunteer: Just a small amount of time can help out operations at A New Leaf tremendously. You can sign up to volunteer in any capacity here.

Start a Donation Drive: Our donation centers are always in need of more supplies.  Our shelters rely heavily on donations from offices and schools to keep visitors stay fed and clothed. Find out how to get a started within your organization here.

Give the Gift of Hope: Become a regular donor to A New Leaf! We are always looking for self-less supporters who value making a difference in their communities and making and impact that may change someone’s life. Your gift to A New Leaf helps us to keep our important operations and programs running. To find out more about how to make a difference donate here.