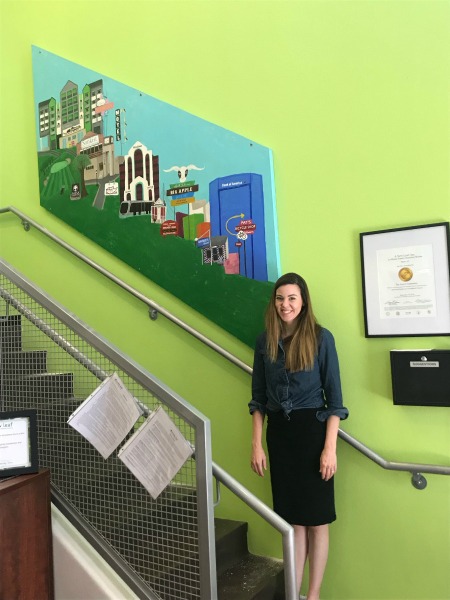 Alyson’s heart was pounding harder and her vision was narrowing as she brushed the vivid color onto the canvas. With each and every precise movement of her paintbrush, the details of the mural began to form a whole. Days turned into weeks as shapes formed across the canvas, buildings of historic Mesa slowly painted onto the long trapezoid-shaped wood material, each creating a brilliant image of the heart and soul of downtown Mesa.

This beautiful artwork was truly worthy of the countless words, lavish memories, and compelling stories it would elicit from viewers. At this point, Alyson wasn’t just depicting the cherished surroundings of her home town; she was expressing a newly reinforced belief in herself.

Alyson, a Mesa native and current resident, never fancied herself as an artist. Though she loved to indulge in creative activities, such as design and sewing, classical artistic abilities of drawing and painting were never really her forte. She’d taken an art class in high school that involved painting, but she felt as if she didn’t quite measure up to the expectations. She ended up dropping this class due to fear of the final grade negatively effecting her grade point average. It wasn’t until a faithful Sunday afternoon at church that Alyson met a new friend.

This new friend happened to be a professional artist who specialized in portrait design and taught local art classes. After plenty of discussion, Alyson decided to muster up every ounce of courage in her heart and give painting another shot. After being invited and strongly encouraged to attend one of this friend’s art classes, Alyson hesitantly agreed. This was the beginning of a new adventure.

“She’d always say, ‘You’re too timid,’” Alyson stated, recalling the times she would turn in an assignment to her now mentor and gal pal. “You have something special in you.” This art teacher would motivate her by saying, “You have so much to give,” a sign of her undying support. Alyson reminisced about her experience in the art class, remembering all of the positive feedback she would receive, and the lack of negative criticism. This left Alyson with new artistic validation. “She’d always point out the good in each of my painting assignments. This really left me with a new- found sense of self-belief and confidence.”

Upon completing the class, Alyson was left with a new perspective that needed to be shared and an increased desire for artistic self-expression. Being an active member, and believer, in the community of Mesa, she speculated how she could use this talent to better the lives of those around her. That’s when she found A New Leaf, an organization which was currently looking for a talented muralist.

“They asked, ‘Have you painted any other murals?’ And I said ‘No.’” Alyson laughed and recounted the events that led to the birth of this artistic escapade. “They said, ‘Well, great!’” and I got to working on it!” After a quick agreement, Alyson pondered what direction she would take with this new task. She had a few ideas, but felt utterly stumped. “I really felt like I shouldn’t be the one to do it.” Alyson remembers thinking. “I really had to learn how to believe in myself and decided that it doesn’t have to be perfect, but I have to try.” Ultimately, the golden ticket eventually came in the form of an innovative idea: a mural of downtown Mesa. Alyson was thrilled to be able to depict her unique perspective on her own hometown and the community she loved dearly.

In fact, along with “the history, the past, and the future,” Alyson stated her inspiration for this contemporary masterpiece was strongly tied to “the idea of the community and feel of local togetherness.” She went on to say, “The idea of us, as citizens of the same city, being together was very important.” After spending a few days in downtown Mesa, snapping photos of the architecture, reviewing each and every image for the tiniest of details, Alyson was ready to begin the creative process.

She started by facilitating this project as a community event, where children from the neighborhood painted the grass and the sky. She then inquired of her friends to participate in helping with the lining for the buildings that would be painted, receiving help when she could. She also included her husband and neighbor in the process by asking them to make the trapezoid- shaped canvas on which the mural is painted. She was left tasked with tracing each building and painting it by hand. Thanks to her intense research, she made her best attempt to include all of the details she could possibly remember.

After weeks became months, and Alyson carefully incorporated each ever so important structure into the painting, she began to wonder if A New Leaf was still interested in the mural she had put all of her heart into. She was joyous when she was “met with excitement and appreciation.” Alyson went on to say, “The sense of validation I received from their genuine reactions only reiterated that I was right to believe in myself.”

With great pride, a strong sense of community, and a new perspective on her life, as well as others, Alyson posed under her vibrant masterpiece above the staircase at A New Leaf’s facility for a congratulatory photograph. Her selfless love of serving those in need combined with this new perspective left her eyes wide open and a new belief in herself as well as other people.
“Everyone has something to give. Everyone has a unique talent that can help improve the life of someone else. All they have to do is believe in themselves.”

Alyson is currently working on a second mural, just like the first. She said it will include more buildings, parks, roads, and different viewpoints and perspectives. It will also feature a sun in the sky with words written on it, saying: “You are not alone.”

A New Leaf invites you to believe in yourself and be of service to others. Volunteer with us now, just like Alyson, to help members of our community improve their lives. Call 480-464-4648 to learn more or visit http://www.turnanewleaf.org/make-difference/volunteer/individual-volunteer-opportunities.html.